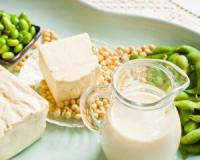 In the past, doctors have warned breast cancer patients not to eat soy foods such as milk, tofu and edamame...

Now, new research published in the Journal of the American Medical Association represents “a complete turnaround” from the previous misunderstanding about the link between eating soy and breast cancer, according to Sally Scroggs, a registered dietician and senior health education specialist at MD Anderson's Cancer Prevention Center in Houston in the United States.

Scroggs says doctors have gone from saying “no soy for breast cancer survivors” to “it's not going to hurt”. She adds that now, it looks like they can say “it may help”. To find out why, keep reading...

To reach their findings, the researchers behind the study followed more than 5,000 women in China who’d undergone a mastectomy for about four years. Overall, 534 women died or had recurrence during the study period.

So what gives soy foods their breast cancer benefits? According to the researchers, it may be their rich content of naturally occurring oestrogens, especially isoflavones, that can mimic the effects of oestrogen in the female body.