Two foods you have in your kitchen right now that can help prevent cancer... 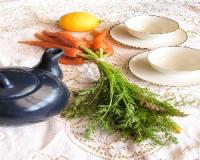 You're in lockdown and it's difficult to get to the shops - but you can still improve your health.

Just with two foods you most likely have in your kitchen right now, you can help prevent cancer - and boost your immune system at the same time!


The benefits of beta-carotene...

A powerful anticancer substance is found in the lowly carrot. Carrots are a super source of beta-carotene, an antioxidant that helps health problems like heart disease, cancer and
cataracts.

One study showed that the beta-carotene in one cup of carrots, taken daily, cuts the incidence of strokes in women by 40% and heart attacks by 22%.

Carrots are nature’s richest source of beta-carotene, which is converted by the body to vitamin A. Studies show that those with high blood levels of beta-carotene do not get cancer – and not only because of its link to vitamin A. Beta-carotene builds up the body’s immune system. It is a powerful antioxidant, a substance that clears the body of cancer-causing free radicals.

Green tea is one of the healthiest beverages you can drink...

Its naturally mild flavour comes from raw leaves that are not fermented – as opposed to most teas. When you pour boiling water on greentea leaves, they double in size.

What’s more, Japanese scientists recently discovered a chemical component in green tea that lowers cholesterol and could stop the growth of some cancers.

Free radicals – high-energy molecules – are present in every human body. However, too many may stimulate cancer growth.

They are naturally controlled and destroyed by a balance of oxygen, fats and elements in the body’s immune system. Green tea “pumps up” the body’s specialised immunity to free radicals and thus may help prevent formation of cancerous tumours.

Dr Fujiki, a researcher at the National Cancer Centre Research Institute in Tokyo, says the average green-tea drinker in Japan consumes a gram of EGCG per day.

This may be one reason that the Japanese have very low levels of lung cancer,
even though they are among the world’s heaviest smokers.

At Rutgers University’s Laboratory for Cancer Research, Dr Chung Yang gave green tea to mice infected with stomach and lung cancers. Incidence of the cancer dropped from 90% to 60%.

No need to go to the shops, boost your health during lockdown with foods you have in your kitchen right now!

Tags: two foods you have in your kitchen right now that can help prevent cancer...

Two foods you have in your kitchen right now that can help prevent cancer...
Rating:
Note: 3.7 of 5 votes