This vegetable can combat cancer, help you lose weight and reduce your blood pressure. Try it! 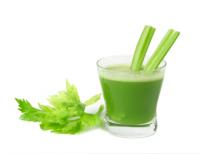 In the past century, healthy eating has become more like a luxury rather than a necessity and a winning ticket for a healthy life. Think about it. These days, we're too busy to cook, we think eating healthy is too expensive, we don't exercise enough and we definitely lack sleep. Not to mention the amount of stress we put on our shoulders every minute of the day and the unhealthy sugary snack we chew on throughout the day.


Up until couple of weeks ago I was doing these exact same things, especially the snack part, chocolate was always my first choice. But one particular day, after two or three hours of work, when snack time came I had no chocolate, no biscuits, nothing of the kind. I turned the fridge upside down looking for something fast, energizing and tasty, hopefully with some chocolaty taste in it. All I could find was the usual food: Cheese, vegetables... And, at the bottom of the fridge drawer, a bunch of celery which I’d bought the day before and promptly forgotten about. So I broke a piece, washed it, ate it and everything changed. I haven't had raw celery before so this was a new culinary experience.  It actually became one of my favorite fresh veggies.  It's salty, refreshing and more like a fruit combined with a vegetable. But does it actually contain any healthy goodies to give me a stronger reason to keep eating it? Well, I did my homework and here's what I discovered.

Celery is related to parsley and fennel. They belong to the same family called the Umbelliferae family. It can grow up to 16 inches tall. The white celery is grown shaded from direct sunlight, thus has less chlorophyll, compared to its greener counterparts. The ribs of celery are crunchy, with a salty taste, and depending on variety, some may taste very salty.

And if you or someone you love is battling cancer...
You definitely can't afford to ignore what could very well be the only natural compound that stops this stealth killer in its tracks.
*********************************
Celery has a lot of nutritional benefits

Its leaves contain a high percentage of vitamin A, whilst the stems are rich in vitamins B1, B2, B6 and C with excellent supplies of potassium, folate, calcium, magnesium, iron, phosphorus, sodium and plenty essential amino acids. During juicing, the nutrients in the fiber are released, aiding bowel movements. The salty taste is a result of the natural organic sodium (salt) contained so celery is very safe for consumption, because it contains a form of organic salt that’s essential for our bodies. In fact, unlike table salt (iodised sodium), the sodium in the celery can also be consumed without any trouble at all by people who are salt-sensitive or those suffering from high blood pressure.

Celery can be consumed raw, juiced or cooked. Most of the compounds in celery hold up well during cooking, which is not the case for many foods that lose nutrients during cooking process.

But what about its health benefits?
Celery has always been associated with lowering of blood pressure, but if we combine it with other juice it provides different formula that help other conditions and diseases. In fact, research shows it might also be effective in combating forms of cancer.  Here’s why:

Celery juice effectively balances the pH in your blood, resulting in neutralizing  acidity. It also acts as a post-workout tonic, replacing lost electrolytes and rehydrates in the athletes'  body with its rich minerals.

Celery also contains at least eight families of anti-cancer compounds, so it's a very powerful weapon against this disease. One of these compounds is called acetylenics, a substance that has been proven to stop the growth of tumor cells in the human body. It also contains phenolic acids which is responsible for blocking the action of prostaglandins that encourage the growth of any tumor cells, and coumarins which help prevent free radicals from damaging skin and body cells. The phytochemical coumarins can actually prevent the formation and evolution of stomach and colon cancers.

But your own immune system can. It’s always your first line of defence. So anything you can do to strengthen it will guard against invaders like rogue cancer cells.

The celery is highly effective in reducing the level of total cholesterol in our body, as research shows. It's also has a cooling effect, especially if consumed cold during dry and hot weather. It helps normalise the body temperature in the most natural way.

It can also help relieve constipation, being a lot more effective than any man-made laxatives. This diuretic properties is a result of the potassium and sodium in celery juice that helps to regulate body fluid and stimulate urine production, making it an important help to rid the body of excess fluid. It even can improve your kidneys' functions by helping the elimination of toxins from your body. This, in turn, prevents the formation of kidney stones. The breaking and elimination of urinary and gall bladder stones are also helped by the juice's diuretic effect.

The polyacetylene found  in celery is also an amazing relief for all inflammation like prheumatoid arthritis, osteoarthritis, gout, asthma and bronchitis.

A glass of celery juice every day over a seven-day period will significantly help lower blood pressure, This is caused by a compound called phtalides, which helps relax the muscle around arteries, dilating the vessels and allowing blood to flow normally. In order to have great results with this treatment, drink the celery juice for one week, take a break for three week, and start over.

The organic alkaline minerals contained in the celery juice have an extremely calming effect on the nervous system, which turns this natural drink into the perfect cure for insomniacs.

And yes, ladies, it does help with weight loss too. Celery juice helps curb your cravings for sweets and rich food.

Do you now understand why I’ve chosed to replace chocolate with celery as my snack of choice? Sure, I still enjoy a small piece of two now and then, but natural snacks come first.

If you have any questions about other healthy snacks and veggies that might prevent serious diseases, ask our experts at our HealthandFitnessClub.

This vegetable can combat cancer, help you lose weight and reduce your blood pressure. Try it!
Rating:
Note: 5 of 1 vote