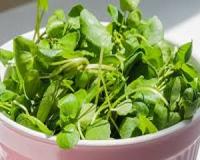 This green leafy vegetable has been shown in past studies as having anti-colon cancer.

In fact, eating this vegetable could reduce the risk of colon cancer by as much as 50%!

And, now a study out of Texas confirms this... It showed to inhibit the growth of polyps in both genetic and nongenetic risk cases.


How you could benefit from eating this green veggie regularly...

The new study showed that spinach interacts with gut bacteria and our genes and the end result is the prevention of ployps in rats.

The researchers fed freeze-dried spinach to the rats with familial adenomatous polyposis for 26 weeks. Genetic polyps often requires the surgical removal of the colon because of the growth of polyps.

But this study showed that just eating spinach could delay polyp growth in this genetic condition.

The various nutrients in spinach works at cellular level to reduce the risk of cancer.

Keep reading to find out which nutrients spinach contains that play this important and protective role in the gut...

The protective nutrients of spinach...

Fibre is an important nutrient for the growth of healthy gut bacteria...

And we know that a healthy gut means a robust immune system and good health - that beyond good digestion!