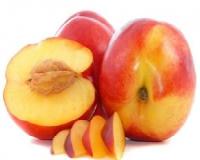 A recent study out of Washington State University and Texas A&M showed that a compound, called polyphenols, in peaches can stop the growth of breast cancer cells and their ability to spread.

All you have to do is eat 2 or 3 peaches per day! And, when they're not in season, drink peach green tea to get these benefits.

In the study, the researchers observed these cancer fighting properties at work after just 12 days.

Peaches also contain antioxidants so you will feel better overall when you eat them to prevent breast and other types of cancer.

But peaches are not the only food that have been shown to fight cancer - read on for more...


Other foods that prevent and fight cancer...

Apples also contain the compound polyphenols that prevent inflammation, and cancer. One of the polyhenols in apples, called phloretin, stops a protein called glucose transporter 2 (GLUT2), which plays a role in advanced-stage cancer cell growth.

Another antioxidant-rich food - carrots also contain beta-carotene, which gives this vegetable its distinct orange color. But besides its pleasing colour, beta-carotene supports  the immune system and helps prevent cancer. This was discovered after researchers reviewed 8 different studies.

In another review, researchers found that people who ate more carrots had 26% lower risk of developing stomach cancer.