This cruciferous vegetable kills cancer cells, boosts heart health, slows down cognitive decline and activates detoxification enzymes (and, no, it's not broccoli!) 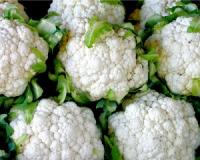 You know that broccoli is one of the healthiest foods on the planet. It's a great source of dietary fibre, pantothenic acid, vitamin B6, vitamin E, manganese, phosphorus, choline, vitamin B1, vitamin A (in the form of carotenoids), potassium and copper.

But what about other vegetables in the cruciferous family? There's one in particular that we often overlook - cauliflower.

Like broccoli, cauliflower deserves a regular rotation in your diet. Brimming with nutrients, vitamins, minerals, antioxidants and other phytochemicals, you can eat it raw, add it to salads or use it in cooking. You can even use cauliflower to create a carb-free pizza base of mash it for a healthier version of mashed potatoes - that's how versatile this vegetable is!

Furthermore, cauliflower helps fight off a number of serious medical problems. To learn more about this as well as for a tasty salad bowl recipe featuring spicy roasted cauliflower, read on.

Four remarkable health benefits that cauliflower offers, according to science

#1: Cauliflower slows down growth of cancerous tumours
Cauliflower is abundant in sulforaphane, a sulphur compound that’s proven to kill cancer stem cells and thereby slow down tumour growth. Some experts believe that eradiating cancer stem cells is key to controlling cancer. Studies have found that combining cauliflower with curcumin – the active compound in turmeric – may specifically help fight prostate cancer. What’s more, one study published in the journal Carcinogenesis discovered that sulforaphane may cut the rate and incidence of chemically induced mammary tumours in animals. It also found that sulforaphane stops the growth of cultured human breast cancer cells, ultimately leading to cell death.

#2: Cauliflower reduces heart disease risk factors
According to well-known American physician Dr Mercola, the sulforaphane found in cauliflower and other members of the cruciferous vegetable family has been found to significantly improve blood pressure and kidney function. Scientists attribute the benefits of sulforaphane to improve DNA methylation, which is critical to proper gene expression and normal cellular function. This holds especially true for the inner lining of the arteries known as the endothelium, which are easily damaged.


************ Best seller *************
The real key to healing cancer is to wipe out the stealth disease lurking behind it...
I admit I was downright shocked when I found out that cancer isn't actually what kills most cancer patients! And I've been a doctor for well over 20 years - so not much surprises me anymore.
Even more astounding - this monumental discovery goes back to the 1970s when former US Air Force Dr Joseph Gold uncovered the REAL killer, a condition that no one in the medical field was even talking about!
That's right - the real culprit behind 3 out of every 4 cancer deaths isn't cancer at all. No! It's a syndrome you've probably never even heard of - called cachexia (pronounced "ka-kek-see-ah").
And if you or someone you love is battling cancer... You definitely can't afford to ignore what could very well be the only natural compound that stops this stealth killer in its tracks.
**********************************
#3: Cauliflower improves memory and learning ability
Cauliflower is an excellent source of the B vitamin choline, which is well-known for its essential role in brain development and health. According to Dr Mercola, one study found that pregnant animals in utero who took choline “super-charged” their brain activity. This indicates that choline may boost cognitive function and improve memory and learning ability. It may even diminish the brain’s vulnerability to toxins during childhood and later in life as well as stave off age-related memory decline, Dr Marcela believes.

Stop letting broccoli overshadow other cruciferous vegetables that are just as beneficial to your health! Are you ready to start eating cauliflower? I thought so – here’s a delicious recipe to get you started…


Check out this colourful salad bowl with spicy roasted cauliflower

This salad bowl is full of colourful, nutrient-dense vegetables – both raw and roasted – which makes it more than just an average salad!

In this recipe, the spicy roasted cauliflower is the star of the show. Roasting the hearty vegetables with spices takes it to another level by giving it a moreish taste and lending it anti-inflammatory compounds.

Here’s how to prepare it…

Method:
1.      Preheat oven to 180ºC.
2.      In a medium bowl, add cauliflower, garlic, chili, cumin, paprika & coconut oil, stir well to coat the cauliflower.
3.      Spread evenly on a lined baking tray and roast for 15 to 20 minutes.
4.      In a food processor or blender, combine all dressing ingredients and process until combined well.
5.      If the dip seems too thick, add more water to thin until you reach your desired consistency.
6.      Assemble all ingredients in your favourite bowls and drizzle with tahini dressing.

This cruciferous vegetable kills cancer cells, boosts heart health, slows down cognitive decline and activates detoxification enzymes (and, no, it's not broccoli!)
Rating:
Note: 5 of 1 vote