This berry may improve the success of cervical cancer treatment by 70%! 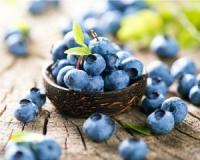 If you're a woman diagnosed with cervical cancer, you may be surprised to learn that there's a certain berry that can help improve the success of your radiation treatment - blueberries!

This is according to a new study by researchers at the University of Missouri (MU) School of Medicine in the United States. The team found that combining blueberry extract with radiation can boost the treatment's effectiveness. Read on for the full scoop!

Radiation therapy involves high-energy X-rays and other particles, such as gamma rays, to destroy cancer cells, Yujiang Fang, a visiting professor at the MU School of Medicine and lead author of the study, explained. Radiation is a good treatment option for some cancers, such as late-stage cervical cancer. That being said, it always causes collateral damage to healthy cells. “Based on previous research, we studied blueberry extract to verify it could be used as a radio-sensitizer,” Fang said.

A radio-sensitizer is a non-toxic chemical that improves the effectiveness of radiation therapy by making cancer cells more responsive to the therapy. A previous study by Fang and his team found that resveratrol, a compound found in red grapes, could be used as a radio-sensitizer for prostate cancer. Blueberries are another food that contain this compound. “In addition to resveratrol, blueberries also contain flavonoids,” Fang said. “Flavonoids are chemicals that may have antioxidant, anti-inflammatory and antibacterial properties.”

***
For less than the price of ONE restaurant meal for your family, you can experience natural pain relief EVERY DAY from...
Plus, rebalance your body and revitalise your health! Over the past 10 years, scientists have discovered you can overcome a number of other health problems with CBD such as…
Find out more here...
***

“Cancer cells avoid death by remodelling themselves,” Fang said. “Along with reducing cell proliferation, the extract also ‘tricks’ cancer cells into dying. So, it inhibits the birth and promotes the death of cancer cells.”


Approximately 12,000 women in the United States are diagnosed with cervical cancer each year

Considering the number of cervical cancer cases around the world each year, these new findings provide hope. Not only are blueberries very common and found all around the world, but also inexpensive and readily accessible, as Fang pointed out.

He concluded that as a natural treatment option for boosting the effectiveness of existing cervical cancer therapies, he feels blueberries would be enthusiastically accepted.
Tags: cervical cancer

This berry may improve the success of cervical cancer treatment by 70%!
Rating:
Note: 5 of 1 vote