The new green on the cancer-fighting block that helps lower risk of breast, prostate and colon cancers 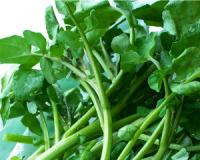 You already know that cruciferous vegetables like broccoli, Brussels sprouts, cabbage and cauliflower are chockfull of cancer-fighting compounds.

But, according to recent research, watercress is yet another green with potent anti-cancer effects. Here's exactly how this peppery green helps prevent certain cancers.

Watercress increases the antioxidants in your blood, which can help you prevent a number of cancers

Research has identified watercress as a powerhouse green vegetable that has great potential for cancer management and prevention. Scientists explain that it works to protect you from cancer by increasing the levels of antioxidants that prevent DNA damage in your blood.
The most recent research on watercress as a cancer-fighting green suggests that by eating it, you can significantly lower your chance of breast, prostate and colon cancers. What’s more, watercress also helps counteract the process in which cancer grows and spreads.


************ Best seller *************
The real key to healing cancer is to wipe out the stealth disease lurking behind it...
I admit I was downright shocked when I found out that cancer isn't actually what kills most cancerpatients! And I've been a doctor for well over 20 years - so not much surprises me anymore.
Even more astounding - this monumental discovery goes back to the 1970s when former US Air Force Dr Joseph Gold uncovered the REAL killer, a condition that no one in the medical field was even talking about!
That's right - the real culprit behind 3 out of every 4 cancer deaths isn't cancer at all. No! It's a syndrome you've probably never even heard of - called cachexia (pronounced "ka-kek-see-ah").
And if you or someone you love is battling cancer... You definitely can't afford to ignore what could very well be the only natural compound that stops this stealth killer in its tracks.
**********************************
Like broccoli, watercress contains glucosinolates – a type of phytochemical that produce isothiocyanates, which are compounds with cancer-fighting properties. Research shows that these compounds may be especially beneficial for preventing breast, prostate, colon, lung, head and neck cancers.
Watercress may help manage growth of cancerous tumours, too. When a tumour outgrows its own food or blood supply, it signals surrounding tissue to deliver more nutrients and oxygen. Watercress contains unique compounds that shut off this signal.

Chewing watercress produces a compound that can kill cancer cells in 24 hours!

What’s even more interesting is that new research on watercress as a cancer-fighting food shows that this green, along with broccoli, can help keep any kind of cancer at bay.
When you chew these vegetables, they produce a compound known as phenethyl isothiocyanate. Studies have found that you can achieve sufficient cancer-preventing levels of phenethyl isothiocyanate through diet alone!
This information may be especially beneficial to those of you with cancerous tumours. This is because conventional cancers treatments like radiation or chemotherapy may cause tumours to disappear, but they don’t kill the cancer stem cells. Moul Dey, an associate professor at SD State University  in South Dakota in the USA, explains, “These cells are frequently resistant to conventional therapies.”
“These tiny cells are very difficult to detect in a tumour,” Dey points out, adding that for a very long time, scientists had no idea they even existed. “It’s like finding a needle in a haystack!”
While cancer stem cells usually only make up about 5% of a tumour, they’re very powerful. These cells can spread cancer to other locations in the body and even regenerate the original tumour.
Dey and his colleagues treated cervical cancer steam cells with phenethyl isothiocyanate and found that 75% of the cells died in just 24 hours. Dey’s team noted that even lower concentrations of phenethyl isothiocyanate were effective and produced similar results.
The next time you’re grocery shopping, remember to fill up your trolley with watercress and broccoli to give your body what it needs to fight cancer cells!
Tags: cancer, cancer treatment, cancer prevention, greens, greens that prevent cancer, anti-cancer effects, cancer-fighting vegetables, watercress, watercress cancer benefits, breast cancer, prostate cancer, colon cancer, cancer news

The new green on the cancer-fighting block that helps lower risk of breast, prostate and colon cancers
Rating:
Note: 5 of 1 vote