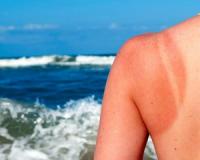 Most people avoid spending too much time in the sun to protect themselves against skin cancer. Now, a top expert says it's possible that the sun's rays can cause colon cancer as well.

“We know that people who develop squamous skin cancer are at higher risk for colon cancer, so we're looking into whether exposure from the sun's ultraviolet rays might be involved,” said Dr Tatiana Oberszyn. Read on for more.

According to the American Cancer Society, about 5.4 million basal and squamous cell skin cancers are diagnosed each year, occurring in about 3.3 million Americans, as some people have more than one.
Basal cell accounts for 80% of cases, while squamous cell makes up the remainder. There’s a third type, known as melanoma, but it’s usually categorised separately because it’s a malignancy that can spread to other parts of the body.

Research conducted in 2015 showed that people with squamous cell skin cancer were at a 50% higher risk of developing another type of cancer, such as colon cancer, says Dr Oberszyn. They were also at a 25% increased risk of dying from it.
“This study found that squamous cell cancer survivors weren’t only at an increased risk of colon cancer, but also prostate, breast lung cancer and melanoma as well,” Dr Oberszyn pointed out.
“Even more concerning is that a study now done in Norway found that people with squamous cell cancer were at 130% higher risk of developing another form of cancer,” she added. And, while all forms of skin cancer are on the rise, squamous cell cases are shooting up the fastest, according to a new report.
Dr Oberszyn offers the following safe sun tips: Stay out of the sun during peak hours, wear protective clothing and a hat and make applying sunscreen a habit.
Tags: colon cancer