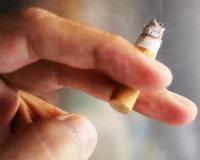 Men with prostate cancer who smoke cigarettes at the time of their diagnosis have a higher risk of experiencing a recurrence or dying of the disease compared with those who don't smoke cigarettes...

This goes according to a new government-funded study published in the Journal of the American Medical Association - and it's one more very important reason to kick the habit of smoking! For the full story, read on.

One in six men will be diagnosed with prostate cancer during his lifetime...

According to the researchers behind this new study, approximately one in six men will be diagnosed with prostate cancer during his lifetime. Prostate cancer is the most common type of cancer among men around the globe and, after lung cancer, the second most lethal.

According to The American Cancer Society, roughly 32,000 men died of prostate cancer in 2010 – and that number just keeps growing each year. Although it’s common, prostate cancer isn’t always aggressive. In fact, in some cases, it doesn’t even require treatment.

To reach their findings, the researchers followed 5,366 men, all of whom were diagnosed with prostate cancer between 1986 and 2006. They followed each man for an average of eight years. During the study period, 16% of the men experienced a recurrence following treatment, while 10% ultimately died of the disease.

The researchers discovered that compared to the men who’d never smoked cigarettes, those who were active smokers at the time of their diagnosis were a whopping 61% more likely to experience a recurrence and 61% more likely to die.

If you smoke, “you’ll have a more aggressive cancer”, said Stacey A Kenfield, an epidemiologist at the Harvard School of Public Health in Boston in the United States.

“These data suggest that smokers develop cancers that are more likely to kill them,” commented Joshi Alumkal, a prostate cancer specialist at Oregon Health and Science University in Portland who wasn’t involved in the study. “Smoking is a key factor that determines how aggressive prostate cancer will be.”
Tags: prostate cancer