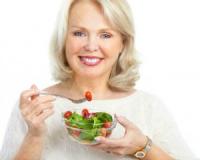 Endometrial cancer - cancer of the uterus lining - the leading gynaecologic cancer. It's also the fourth most common cancer in women in America!

What's also interesting is that more than 75% of endometrial cancers occur in women over the age of 55. If you're an older woman, you're probably now wondering if there's anything you can do to prevent endometrial cancer...

According to a brand new study published in the Journal of Clinical Oncology, there is... You can lose weight!

“Many older adults think it's too late to benefit from weight loss, or think that because they are overweight or obese, the damage has already been done. But our findings show that’s not true,” said study author Juhua Luo,  in a news release published by the American Society of Clinical Oncology (ASCO).

Luo is an associate professor of epidemiology and biostatistics at Indiana University Bloomington’s School of Public Health in Bloomington in the USA. “It's never too late, and even moderate weight loss can make a big difference when it comes to cancer risk,” added Luo.

To reach their findings, Luo and her team looked at data from over 35,000 women living in America. These women were aged between 50 and 79 years old. The study included an average of more than 10 years of follow-up.


******** FEATURED ********
DIETS DON'T WORK!
How many diets have you been on, weight loss pills you’ve consumed, injections you’ve had to endure? You might have lost some weight but it’s probably all back on again…   The truth is that there is no magic solution to make the weight drop off.   The secret to successful weight loss isn’t starving yourself nor is it limiting your food choices or following a painful pattern of eating.
***************************

Researchers found that woman who dropped 5% body weight or more were 29% less likely to develop endometrial cancer. These results remained the same even after researchers accounted for factors like age or how much weight they lost.

As for the obese women in the study who lost 5% body weight or more? They lowered their chance of developing endometrial cancer by an impressive 56%. Researchers noted that obese or overweight woman who achieved a normal body mass index (BMI) had exactly the same risk as those who maintained a normal BMI.

Furthermore, researchers found that women who picked up 4.5 kg or more were 26% more likely to develop endometrial cancer. But while the study linked losing weight to lowered risk of endometrial cancer, it didn’t prove cause-and-effect.


Thousands of past studies have linked obesity to cancer risk

This isn’t the first study to find an association between losing weight and lowering your cancer risk. Jennifer Ligibel, an ASCO expert in cancer prevention, sheds some light on the topic, “There have been more than a thousand studies linking obesity to an increased risk of endometrial and other cancers, but almost none that look at the relationship between weight loss and cancer risk.”

Slimming down can help older women prevent the most common gynaecologic cancer
Rating:
Note: 5 of 1 vote