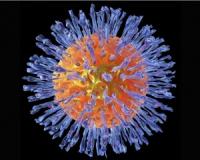 There have been longstanding speculations that cytomegalovirus, a common type of herpes virus, is associated with aggressive brain cancers.

However, a brand new study by researchers at John Hopkins University in Maryland in the USA has found that these earlier reports are wrong. Read on for the full scoop.

To reach their findings, the John Hopkins researchers analysed brain tumour tissue from 125 patients who had aggressive brain cancers called gliomas. Twenty-six of the patients were children.
A glioma is a type of tumour that arises from glial cells and starts in the spine or brain. The most common site of gliomas is the brain. In fact, they make up about 30% of all brain and central nervous system tumours as well as 80% of all malignant brain tumours.
Previous lab studies have also found no evidence of cytomegalovirus (CMV) – a common virus that infects people of all ages. According to the US Centers for Disease Control and Prevention (CDC), CMV affects more than half of all adults by the time they reach age 40.
According to Health24, when a healthy person becomes infected with CMV, their immune system stops the virus from replicating and causing disease. The virus then remains dormant, but never completely eradicates from their body.
Only when someone with CMV has a severely weak immune system, is it likely for the virus to result in significant disease.

That said, the new findings suggest little to no connection between CMV and the brain cancers in questions, the researchers said.
Dr Angelo De Marzo, a professor of pathology, oncology and urology at Johns Hopkins Kimmel Cancer Center, said: “We’ve found no evidence of CMV in these tissues, and if there is no virus, targeting that virus to affect cancer using antiviral drugs or tailored vaccines doesn't make biological sense.”

This earlier research led to speculation that therapies targeting CMV could improve outcomes for patients with gliomas. Dr Matthias Holdhoff, an associate professor of oncology and neurosurgery at the Kimmel Cancer Center, explained in a John Hopkins news release: “Significant resources have already gone into this field of study, making it very important to definitively answer the question of whether there's an association between CMV and gliomas or not.”
The researchers behind the study said that doctors can reasonably assume that the connection between CMV and brain cancer is very unlikely.
Tags: cancer, brain cancer, herpes, herpes virus, cytomegalovirus, brain cancer and cytomegalovirus, gliomas, aggressive brain cancer, cancer news

Researchers report that there's no link between cytomegalovirus and aggressive brain cancers
Rating:
Note: 5 of 1 vote