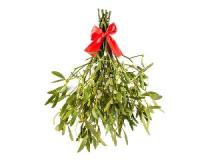 Early in the 20th century, naturalist Rudolf Steiner developed the first extracts of mistletoe for injection. He theorised that it might help treat cancer because, like cancer, mistletoe is a parasitic growth that eventually kills its host.

According to studies, mistletoe has the ability to kill various types of cancer cells while simultaneously stimulating the immune system, thus fighting progression of the disease.

There are actually more than eight decades of research to support the use of mistletoe as a cancer treatment.

Other studies involving many other types of cancers show that mistletoe is at least as effective as mainstream “treatments,” but without any known side effects, unlike radiation and chemotherapy.

Most recently, the Institute for Preventive Medicine in Germany published the results of a study involving more than 1,668 cancer patients treated with mistletoe. Patients taking the herb had up to a 56% higher survival rate than the control group.

Probably the most interesting part of this study was the variety of cancers affected, which included colorectal, stomach, breast, and lung.

And a 2003 review on mistletoe identified 23 studies testing its efficacy, and 12 of the 23 showed one or more statistically significant, positive results, while another seven studies showed at least one positive trend – pretty incredible stats.

But you can't just brew up a tea of mistletoe - find out why below...

You definitely need to work with a doctor with this treatment...

Treatment with mistletoe isn’t quite as simple as some other herbal treatments.

Unfortunately, you can’t simply brew up a cup of mistletoe tea to enjoy by the holiday fire.

Although mistletoe is available in herb form, it’s important not to self-treat with it, as the fruit of many varieties of mistletoe are actually poisonous if ingested.

Besides, the most effective mistletoe therapies are usually given by injection into the muscle (intramuscular, or IM), beneath the skin (subcutaneous, or Sub-Q), or into a vein (intravenous, or IV).

In most reported studies, injections under the skin were given 2 to 3 times a week for various lengths of time.

So you definitely need to work with a doctor knowledgeable in Natural Medicine, like Dr Golding, to benefit from this treatment.

Still - it goes to show - Nature has solutions for just about all illnesses in a variety of different forms and sources - it's a pity mainstream medicine isn't focused on learning from the greatest teacher all of time (Mother Nature) - but instead are more interested in patents.

Find out more about this treatment here.