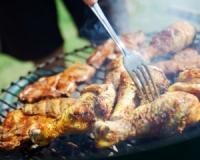 You think that you're protecting your health by grilling your food. But you're you're WRONG!

Yes, grilling is a healthy cooking technique adapted by our ancestors AKA the Paleo folk. But improper grilling methods can be hazardous to your health! Does this mean you have to give up the sizzling steaks? Not at all.

By simply following a couple of rules for safe grilling, you can safeguard you and your family from exposure to excess cancer-causing carcinogens and enjoy tasty, flavourful grilled foods. Read on for six tips to help you avoid having your grilled foods convert into Heterocyclic amines (HCAs), which are associated which several cancers, including colon and stomach.

#1: Use lean meats
When fat from the meats drip down into the coals or fire, they generate a cancer-causing smoke called polycyclic aromatic hydrocarbons (PAHs), which get deposited into food. This is minimised when you use leaner cuts of meat.
#2: Don’t overcook your meat
The more well done a meat or vegetables are cooked, the higher concentration of carcinogenic HCAs can form. Therefore, rare, medium-rare or medium are healthier choices than well done. If you’re not too fond of rare, use a meat thermometer and stop cooking when it shows the right temperature. Using marinades and meat tenderisers can also help prevent overcooking.


************ Best seller *************
The real key to healing cancer is to wipe out the stealth disease lurking behind it...
I admit I was downright shocked when I found out that cancer isn't actually what kills most cancer patients! And I've been a doctor for well over 20 years - so not much surprises me anymore.
Even more astounding - this monumental discovery goes back to the 1970s when former US Air Force Dr Joseph Gold uncovered the REAL killer, a condition that no one in the medical field was even talking about!
That's right - the real culprit behind 3 out of every 4 cancer deaths isn't cancer at all. No! It's a syndrome you've probably never even heard of - called cachexia (pronounced "ka-kek-see-ah").
And if you or someone you love is battling cancer... You definitely can't afford to ignore what could very well be the only natural compound that stops this stealth killer in its tracks.
**********************************
#3: Precook your meat
This tip is especially useful for meats that have bones in them, such as chicken drumsticks and so on. Half cooking the meat in your microwave, stovetop or oven, then popping the cuts onto the grill will greatly minimise the formation of HCAs since less cooking time is required. This will also ensure delicious, evenly cooked meats.
#4: Use the grill packet method
Wrapping meats and veggies in a foil packet cooks evenly, seals in flavour and significantly minimises the formation of HCAs. Using a grill basket does the same thing – they’re a great investment, especially if you’re big on cooking.
#5: Grill fruits and veggies
Fruits and veggies will give you a good dose of fibre and protective antioxidants, so be sure to have some on the side when you grill meat to balance out your meal. No need to overcook them. I love grilled peaches, pineapple, tomatoes and butternut!
#6: Always clean your grill
Clean your grill in between every use. Removing old gunk will reduce smoking, quicken cooking time and reduce HCA formation, not to mention make your food taste better.
Here’s to healthier cooking!
Tags: hcas, carcinogens, carniogens grilling, carcinogens cancer, cancer, cancer risk, grilling risks, grilling cancer, cancer and foods, cancer prevention, cancer prevention tips, high smoke cancer, overcooked meat cancer

How to avoid having your grilled food convert into HCAs - chemicals that can cause cancers like colon and stomach
Rating:
Note: 5 of 1 vote