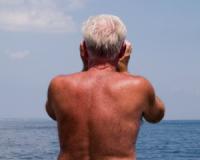 It's normal for a man to worry more about prostate cancer than skin cancer. But men should be worried about skin cancer too, for it's incredibly common. Plus, the rates of melanoma, the deadliest form of skin cancer, are rising rapidly for reasons that scientists can't seem to figure out!

According to science, men are more likely than women to develop melanoma. They're also way more likely to die of it. Therefore, it goes without saying that men need to start educating themselves about this condition and protecting themselves from the harmful rays of the sun.

On that note, here are four things men should know about skin cancer.

#1: Melanoma is the fifth most common cancer in men
Believe it or not, over two million Americans develop skin cancer every year. And most of these cases involve basal and squamous cell carcinomas, which are two disfiguring but rarely fatal forms of skin cancer. Melanoma, the deadliest form of skin cancer, is also common and affected approximately 25 in every 100,000 men between the years 2006 and 2010 according to the CDC (Centers for Disease Control and Prevention). This makes melanoma the fifth most common cancer in men in America.

#2: Men are more likely to die of melanoma than women
According to the American Cancer Society, melanoma is approximately 42% more common in men than in women. What’s even more troubling is the difference in deaths – according to reports, almost twice as many men die of melanoma every year. In 2013, it was reported that 6,280 men died of melanoma compared to only 3,200 women. And it seems as if the mortality rate in men just keeps increasing – from 2.6 deaths per 100,000 in the year 1975 compared to 4.1 per 100,000 in 1010. This cancer is the only one with a rising mortality rate in men.

#3: Men aren’t properly educated about skin cancer
Skin cancer prevention and awareness is seriously lacking among men. A recent analysis of government survey data proved this. The report found that men were more likely than women to report having being sunburned in the previous year. A survey by the Skin Cancer Foundation even found that around 70% of men have no idea what the warnings signs of melanoma are! Plus, more than half of the men in the survey said they probably wouldn’t ask their doctor for a skin exam. This same survey also found that nearly half of male survey subjects said they hadn’t applied sunscreen in the past year.

#4: Men should use sun protection and get regularly checked out by a dermatologist
First things first, you must know the warning signs of the disease. Check your skin regularly for new moles that are growing or tender, and ask your doctor how often you should get checked out by a dermatologist. Next up, the risk factors of melanoma – these include indoor tanning, the number of moles on your skin, having freckles or fair skin, severe sunburn, ultraviolet radiation and family history.

To control these risk factors, you should stay in shaded areas during peak hours of sunshine and avoid indoor tanning, for example. Another tip? When you’re out in the sun, use an effective sunscreen with a high SPF (of at least 30) and make sure you reapply it as necessary.
Tags: melanoma, skin cancer, skin cancer risk, skin cancer in men, melanoma in men, melanoma signs and symptoms, melanoma statistics, melanoma prevention

Four things every man should know about melanoma - the deadliest form of skin cancer that's most common in men
Rating:
Note: 5 of 1 vote