Four lung cancer symptoms that go beyond a cough 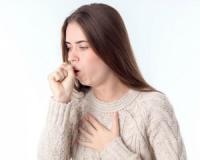 If there's one lung cancer symptom that you think of right off the bat, it's a cough. After all, it's the most common symptom of the disease, according to a study published in the journal Thorax, which found that 65% cases included it.

However, a cough doesn't necessarily mean you have lung cancer. It can also be a symptom of something much less serious, like respiratory infection. A cough also isn't the only lung cancer symptom out there. Read on for four surprising symptoms of the disease.

#1: Wheezing
A cancer blockage in an airway can result in more than just coughing – it can also lead to wheezing. When an airway is narrowed or constricted, the air will make a whistling or wheezing sound as it moves through.

#2: Chest pain
Because your chest wall has many nerve fibre endings, lung cancer that’s invading this part of your chest can cause bad pain. You might find that the pain becomes worse when you cough, laugh or breathe deeply, says the American Cancer Society. That being said, chest pain can also be due to excessive coughing as a chronic cough can strain your chest muscles.

#3: Shortness of breath
If you feel short of breath, or as if you can’t breathe enough air into your lung, it can indicate that there’s a blockage such as a tumour in your lungs. However, this could also be a sign of a build-up of fluid between your chest wall and lungs, which happens when the cancer invades your lymphatics and venous structures, which are responsible for allowing fluid to drain from your chest.

#4: Weak or hoarse voice
There’s a nerve called the recurrent laryngeal nerve that’s located between your oesophagus and trachea, just under your aorta. This nerve connects to your larynx, which houses your vocal cords, so if there’s a tumour pressing on it, it can cause a hoarse, raspy or weak voice.

If you’re experiencing some of these symptoms, get checked out by your doctor to rule out the possibility of lung cancer.
Tags: lung cancer

Four lung cancer symptoms that go beyond a cough
Rating:
Note: 5 of 1 vote