Even third-hand smokes increases your risk of lung cancer! 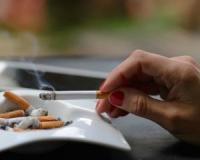 Last year, researchers at the Department of Energy's Lawrence Berkeley National Laboratory in the United States found that brief exposure to third-hand smoke, which is the poisonous residue that lingers on surfaces longer after a cigarette has been put out, was tied to low body weight and immune changes in juvenile mice.

Young children are most vulnerable to third-hand smoke’s harmful effects as they crawl and put objects in their mouths and are therefore likely to come into contact with contaminated surfaces.

For the study, the researchers housed a strain of mice that’s susceptible to lung cancer in an environment with fabric-infused third-hand-smoke. The mice were between four and seven weeks old at the start of the study. They ingested a dose of third-hand smoke comparable to the ingestion exposure of a human toddler living in a home with smokers.

Forty weeks after the last exposure, the researchers found that he mice had an increased incidence of lung cancer, larger tumours and a greater numbers of tumours compared to control mice.

Even third-hand smokes increases your risk of lung cancer!
Rating:
Note: 5 of 1 vote