Drinking plus being overweight is a recipe for oesophageal cancer, report warns 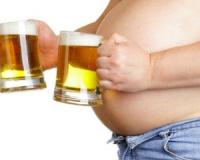 According to a new report, people who drink and are overweight are at higher risk for two of the most common types of oesophageal cancer.

In the report compiled by experts at the AICR and the World Cancer Research Fund, it was revealed that one third - that's about 5,600 per year - of oesophageal cancer cases in the United States could be prevented if people didn't drink and maintained a healthy weight.

“These findings add to the evidence that lifestyle plays a powerful role in cancer risk,” said Alice Bender, head of nutrition at the American Institute for Cancer Research (AICR). Read on for the full scoop.

Previous research has linked drinking and obesity to cancer

This report isn’t the first to link drinking and obesity to cancer. “Obesity is now linked to 11 types of cancer and alcohol links to six,” said Bender in a news release.
“We want individuals to know you can take important lifestyle steps to reduce risk for many kinds of cancer,” she added.
Report reveals that drinking and obesity boost risk of esophageal cancer
To draw up their conclusions, experts reviewed 46 studies that involved over 15 million adults in total, including 31,000 who developed oesophageal cancer.


************ Best seller *************
The real key to healing cancer is to wipe out the stealth disease lurking behind it...
I admit I was downright shocked when I found out that cancer isn't actually what kills most cancer patients! And I've been a doctor for well over 20 years - so not much surprises me anymore.
Even more astounding - this monumental discovery goes back to the 1970s when former US Air Force Dr Joseph Gold uncovered the REAL killer, a condition that no one in the medical field was even talking about!
That's right - the real culprit behind 3 out of every 4 cancer deaths isn't cancer at all. No! It's a syndrome you've probably never even heard of - called cachexia (pronounced "ka-kek-see-ah").
And if you or someone you love is battling cancer... You definitely can't afford to ignore what could very well be the only natural compound that stops this stealth killer in its tracks.
**********************************
Their analysis showed that for every 5-point increase in body mass index (BMI), there was a 48% boosted risk of oesophageal adenocarcinoma. This type of oesophageal cancer generally develops in the lower oesophagus. Statistics show that approximately 60% of oesophageal cancer cases in the US are adenocarcinomas.
Dr Anthony Starpoli, who helps direct oesophageal endotherapy at Lenox Hill Hospital in New York City, wasn’t surprised by these new findings. “The tremendous rise in oesophageal cancer has paralleled the obesity epidemic,” he said. “This study offers support to this observation.”
The researchers then found that the risk of oesophageal squamous cell carcinoma increased by 25% for every 10 g of alcohol consumed per day. This amount of alcohol is about equivalent to one glass of wine or beer.
Squamous cell oesophageal cancer develops from the cells that line the oesophagus and accounts for one-third of oesophageal cancers in the US. Worldwide, it’s the most common type of oesophageal cancer.
“Alcohol could have a direct carcinogenic effect, or it could be that reflux being worsened by alcohol leads to more damage to the lining or inner wall of the esophagus,” said Dr Starpoli. A body of research shows that chronic acid reflux is a big risk factor for oesophageal cancer.
“And of course, the empty calories from alcohol contribute to obesity,” he added.

Drinking plus being overweight is a recipe for oesophageal cancer, report warns
Rating:
Note: 5 of 1 vote