Clinical trial shows that the measles vaccine can kill cancer cells and cause tumours to disappear! 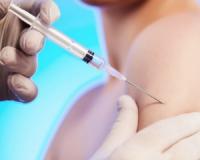 Could the measles vaccine kill cancer cells? According to a new trial that took place in the US, yes.

The trial, which involved injecting two cancer sufferers with a heavy dose of the measles vaccine - approximately 10,000 times stronger than that used for a normal vaccination, has stunned both scientists and doctors all around the world!

Keep reading to find out more about how the measles vaccine can kill cancer cells and cause tumours to disappear...

In the trial, researchers found that one of the two cancer sufferers experienced an incredible total remission with all of her tumours vanishing.

The other patient experienced a remission too, but her cancer returned shortly afterwards. The researchers said that this indicates that the measles vaccine may not be a solution for everyone who suffers from tumours.

So what’s the mechanism underlying the cure? According to the researchers behind the trial, when the measles vaccine is injected, it latches onto cancerous cells, particularly those found in tumours.

The measles virus then attacks the cancerous cells, causing the tumours to disappear. However, researchers noted that myeloma, which kills over 70,000 people a year worldwide with a five-year survival rate of only around 45%, isn’t restricted to tumours as it can affect bone marrow too.

Researchers found that the measles vaccine cleared the bone marrow of cancerous cells, which essentially means that the patient was completely cancer-free! This came after the patient had tried common cancer treatments such as chemotherapy and radiation.

Clinical trial shows that the measles vaccine can kill cancer cells and cause tumours to disappear!
Rating:
Note: 5 of 1 vote