Cancer is the most baffling illness of the 21st century! These three essential oils are particularly effective in preventing skin cancer 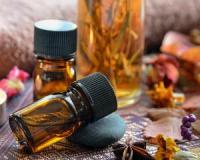 For centuries, various cultures around the world have been using essential oils for religious ceremonies, traditional healing and personal aromatic therapies.

Records from ancient civilisations in India, China, Egypt and Greece all may homage to these plant-derived oils and their remarkable health and wellness benefits.

When it comes to chronic diseases like cancer, most of us frown upon the mere thought of alternative treatment - especially ones that aren't supported by modern scientific evidence.

Cancer is undoubtedly the most baffling illness of the 21st century and research is beginning to find that essential oils are effective in preventing some forms of the devastating disease, such as skin cancer. Read on for three certain essential oils that protect against skin cancer.

Use these three essential oils to prevent skin cancer


************ Best seller *************
The real key to healing cancer is to wipe out the stealth disease lurking behind it...
I admit I was downright shocked when I found out that cancer isn't actually what kills most cancer patients! And I've been a doctor for well over 20 years - so not much surprises me anymore.
Even more astounding - this monumental discovery goes back to the 1970s when former US Air Force Dr Joseph Gold uncovered the REAL killer, a condition that no one in the medical field was even talking about!
That's right - the real culprit behind 3 out of every 4 cancer deaths isn't cancer at all. No! It's a syndrome you've probably never even heard of - called cachexia (pronounced "ka-kek-see-ah").
And if you or someone you love is battling cancer... You definitely can't afford to ignore what could very well be the only natural compound that stops this stealth killer in its tracks.
**********************************
#2: Frankincense essential oil
Back in the days of folk medicine, frankincense was common used for healing health concerns including skin conditions. A body of research support the oil’s ability to improve health – some show that it may even combat certain cancers like skin, breast and bladder cancers.
Most species of frankincense oil pack around 17 active agents that target specific skin tumours. People who rely on traditional skin cancer treatments should consider this oil as it holds the potential to minimise symptoms naturally.
#3: Myrrh essential oil
Extracted through steam-distilling methods from the resin of the Commiphora Myrrha tree, myrrh essential oil is still as popular as it was in the ancient world where the Chinese and Egyptians used it as medicine.
A study published in 2011 suggested that this oil may have cancer-fighting properties. It concluded that the myrrh resin extract may inhibit the growth of some cancer cells.
Most leading pharmacies will stock these three essential oils.
Tags: cancer, skin cancer, skin cancer causes, skin cancer prevention, natural remedies, essential oils, essential oils for skin cancer, cancer news

Cancer is the most baffling illness of the 21st century! These three essential oils are particularly effective in preventing skin cancer
Rating:
Note: 5 of 1 vote