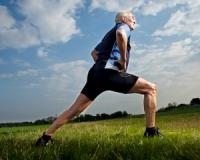 Following a moderate or intense exercise programme isn't just good for relieving stress and mental tension, losing and controlling your weight, keeping your heart healthy, cutting your risk of some cancers and strengthening your joints and bones...

According to a new study by The American Cancer Society that was presented at the annual meeting of the American Association for Cancer Research in New Orleans, regular exercise may improve a man's odds of surviving prostate cancer, too! Read on for the full scoop.

Wang and her team looked at more than 10,000 men between ages 50 and 93. Between 1992 and 2011, the men were diagnosed with localised prostate cancer, which means that the cancer hadn’t spread beyond their prostate gland. The team also took down information on the men’s physical activity before and after their diagnosis.

One man is diagnosed with prostate cancer every 3 minutes.
But there’s no reason you should be the next statistic – Here’s why…


75% of all prostate cancer cases are preventable.

So why are millions of men still being diagnosed?

Because they go for the stock-standard PSA (prostate specific antigen) test their GP tells them is the only way to check their prostate health.

So, what’s wrong with the PSA test?

Instead, it measures a protein your normal prostate cells make. And the more prostate tissue you have, the higher the protein levels in your blood.

It isn’t an accurate way to detect cancer.

Although the study proved a relationship between moderate to intense exercise and better chance of prostate cancer survival, it didn’t prove cause and effect. That said, Wang reported in a news release that, “our results support evidence that prostate cancer survivors should adhere to physical activity guidelines, and suggest that physicians should consider promoting a physically active lifestyle to their prostate cancer patients.”

Wondering just how much exercise you need to do to cut your risk of dying of prostate cancer? Wang reported, “The American Cancer Society recommends adults engage in a minimum of 150 minutes of moderate or 75 minutes of vigorous physical activity per week,” Wang said. “These results indicate that following these guidelines might be associated with better prognosis.”