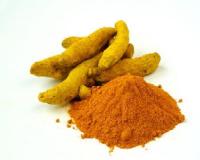 Curcumin is an extract that comes from the turmeric root. It's a powerful antioxidant that's being studied for its ability to stop cancer, amongst other health benefits.

Studies have already shown that curcumin helps stop prostate cancer growth by 50%, shrink lung tumours by 36% and colon cancer masses by 40%. But that's just one of the ways it stops cancer.

In a recent new study, published in the Proceedings of the National Academy of Sciences, the researchers used x-ray crystallography to get 3-D images of curcumin in action against cancer cells.

The curcumin physically bound to the DYRK2 enzyme, which in turn stops proteasomes from forming. Now, this is very significant because, these protein complexes feed the development and growth of the cancer cells. But when curcumin binds to this enzyme, the cancer cells are no longer able to grow and multiply.

This is great news for people suffering from aggressive and lethal types of cancers, like triple-negative breast cancer and multiple myeloma.

And, even better news is that curcumin stops the cancer from growing and spreading without affecting healthy cells, unlike chemo, readiation and other drugs.

Other ways researchers have observed curcumin in action against cancer include:

* It stops the blood vessels that nourish tumours from developing and growing
* Stops the formation of the molecules that allow cancer cells to stick to cell walls
* Disables the mutant genes that develop into tumours
* Protects DNA from damage which can lead to cancer
* And, strengthens the immune system

It seems curcumin offers a whole army of defences against cancer, find out more about it here...