This diet can help you avoid frailty as you get older 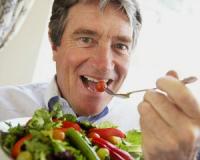 The Mediterranean diet is renowned for the benefits its offers your health, from boosting brain health and preventing cancer, to controlling diabetes and promoting weight loss.

As if you needed another reason to give this diet a try, a new study published in the Journal of the American Geriatrics Society has shown that the Mediterranean diet may also help keep you healthy and independent as you age by preventing frailty.

Keep reading for the full findings…

Frailty is common among older people, with symptoms ranging from low energy to weak muscle strength

It goes without saying that frailty is also associated with a lower quality of life.

Because diet is thought to play a key role in the development of frailty, researchers at University College London in the United Kingdom wanted to see if a healthy diet might reduce the risk. The researchers analysed evidence from all published studies examining associations between Mediterranean diets and the development of frailty in older adults. Their analysis include people in France, Italy, Spain and China.

What’s more, a study from the University of Edinburgh showed that Mediterranean diets also keep brains from shrinking in old age. The researchers found that healthy seniors who closely followed a .Mediterranean diet had half the brain loss of those who didn’t follow the diet.

This diet can help you avoid frailty as you get older
Rating:
Note: 5 of 1 vote