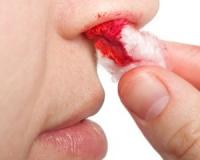 If you suffer from haemorrhagic telangiectasia, a disorder that results in the development of multiple abnormalities in the blood vessels, you probably think that the only way to reduce your nosebleeds is by taking medications.

In that case, think again! A new study published in the Journal of the American Medical Association contends that a basic salt-based spray is just as effective as drugs and medicated sprays in controlling chronic nosebleeds...

People who suffer from haemorrhagic telangiectasia are prone to chronic nosebleeds

People who are diagnosed with haemorrhagic telangiectasia (or HHT) are plagued with nosebleeds. While one patient may only have a single nosebleed a week, others have more than two a day! HHT-related nosebleeds are slightly different to common nosebleeds.

For the study, Dr Kevin Whitehead, study author and associate professor of internal medicine at the University of Utah School of Medicine in the US, and his research team assessed 121 subjects with HHT. Study subjects sprayed either a saline solution (salt plus water) or one of three medications (bevacizumab, estriol or tranexamic acid) into their nose twice a day for 12 weeks.

Dr Whitehead and his team found that the saline spray was as effective in reducing nosebleeds as the medications. He reported, “This research highlights that there could be a benefit even in the simplest of interventions.”

“No drug proved to be any better than the saline placebo, but the majority of patients improved over the course of treatment – even those using saline,” Dr Whitehead added.