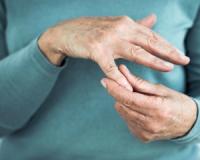 The aches and pains of arthritic joints have been around as long as the human race. And before pharmacies opened on every corner, people used natural remedies to ease pain and stiffness.

“To understand why many old-fashioned pain remedies worked, you need to understand that if someone believes in a pain cure, their brain will produce endorphins that ease their pain,” explains Andrew G Kowal, MD, a pain management specialist at Lahey Clinic in the United States. “It's called the placebo effect, and it's real.”

That being said, some old-fashioned remedies have real benefits, one of them which is apple cider vinegar. Here's why you should give it a try if you have arthritic joints…

Apple cider vinegar isn’t a new remedy – in fact, it’s been used in folk medicine for hundreds of years. Hippocrates is believed to have used this remedy to treat his patients in 400 BC.

According to the University of Maryland Medical Center, apple cider vinegar may have antimicrobial properties, making it potentially useful for killing germs and treating food poisoning.

Alternative health practitioners around the world swear by apple cider vinegar for treating the symptoms of arthritic joints, such as joint pain and stiffness. Vinegar is believed to banish pain associated with arthritis and slow down progression of the disease.

So how much apple cider vinegar should you drink to relieve your arthritic joints? Researchers from the University of Florida recommend mixing two teaspoons in a glass of water. Drink the concoction before each meal to keep symptoms of arthritic joints at bay.
Tags: arthritic joints

This old-fashioned remedy for arthritic joints is still one of the best
Rating:
Note: 3.63 of 4 votes